Sometimes a low-tech solution to automation is all that is needed to save a lot of work. Although I now use robotic lawn mowers, you might still enjoy the story of how I once turned my gas-powered walk-behind mower into a work-saving autonomous mower. My neighbors certainly found it amusing. (More on that later.)

This simple hack cut my mowing time to about a third of what it used to be. I’m not sure of the exact cost because most of the parts were scrounged. Even the mower was a $30 garage sale special. In total, I probably spent less than $50 for the whole project, including the mower.

I should mention that this is a rewrite of an article I posted on my old Web site several years ago. This updated version contains revised information, ideas for improvement, a spiffy new cross-section illustration, and a video. Yet another version appeared in the O’Reilly book Smart Home Hacks

by Gordon Meyer (which is a book I would still recommend even if I didn’t have articles in it.)

Before we get started, I must give this warning: What I am describing is how I have mowed my lawn and not a suggestion of how to mow yours. This could be very dangerous. I am not responsible if you injure, mame, or kill your pets, family, or neighbors or damage property. (Just ask my wife about her former strawberry patch.) This article is for your entertainment purposes only. With that out of the way, here’s my story.

Thinking About Not Mowing

My lawn is nearly an acre in size. The back yard, which is the largest part of that, is mostly one large rectangle with almost no trees. It used to take me nearly four hours to mow, and that was required twice a week in the spring. That gave me plenty of time to think about how to get out of mowing it!

I realized that two slightly overlapping circles would cover the bulk of our back yard. It was then a simple matter to modify a self-propelled mower to cut these circles by winding a tether cable on a spool. While the circles were being mowed, I used a second push mower to trim the corners.

Collecting and Assembling the Parts

My mower has a 21-inch cutting width and I just happened to have an old wire spool with a circumference of 19 inches. That gives a perfect overlap as the mower makes each pass around the circle.

I went to the hardware store and bought two short steel pipes that fit perfectly one inside the other. I attached the narrower pipe so it stuck out of the bottom of the spool. The larger pipe acts as a mount for the whole assembly and is set in the ground with a little concrete. The concrete is sunk low enough to be covered with a layer of dirt and grass. The top of the pipe protrudes only enough to be level with the ground surface. It is barely visible and not high enough to be a tripping danger. 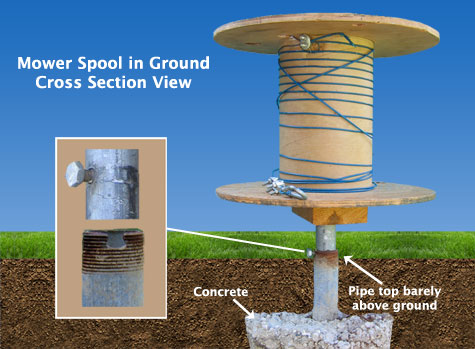 Note the notch in the ground pipe. The spool pipe has a bolt threaded into it that fits in the notch to keep the whole spool from spinning

(I later learned the hard way that it is good to put a cap on the pipe so it doesn’t fill with dirt. It is also good for that cap to be a bright color so the pipe can be found in the Spring without a metal detector.)

The cable also came from my local hardware store. It is made of stranded steel wire with a plastic coating. I used one longer piece along with a shorter extension to make it easy to mow my two different sized circles. Cable clamps were used to make loops on the ends of each section.

Clips with spring latches make it easy to quickly attach the cable sections together and to the mower. I attached large eyelets to both sides of my mower so I could change the direction of mowing. That helps keep the grass from getting matted down in one direction.

I had to defeat the mower’s self-propelled safety lever to make it run without me holding the handle. A simple clip made from an old piece of metal did the job.

As you can imagine, safety is a big issue here. I only ran this with supervision, in my fenced yard, and only after first inspecting the yard for toys and objects that could get hit. No children or pets were allowed in the area while the mower was running.

That’s about it. I put the spool in one end of the lawn, let it run in circles until all of the cable was wound up, then moved it to the other end of the lawn. It usually finished just before I completed the parts outside of the circles.

Getting to Know the Neighbors

I experimented for a few weekends before getting everything working just right. The first time I fully let it run was a holiday weekend and our neighbors had guests visiting.

The mower was making circles and I was happily mowing the corners by hand. I was keeping an eye on the circle mower but hadn’t noticed what was going on behind me. A small crowed had gathered along my fence to watch the show. I looked up just in time to see everyone standing there with one lady running off yelling “I’m going to get my camera!”

We were new to the neighborhood and my mower antics served as a great ice-breaker for getting to know several of our new neighbors.

I’ve thought of a few improvement ideas but have no reason to test them since I now use robot mowers. They might be of interest to others, though:

Well, there you have it. This was an incredibly fun project, and one that my friends and neighbors still talk about. For those of you interested in robot mowers, check out my Robo Mower Wiki site I created for robot mower enthusiasts to share information.